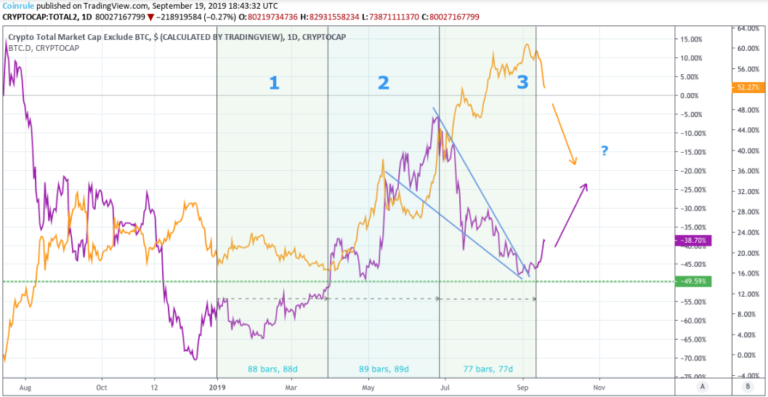 2019 was so far, once again, volatile, yet full of opportunities.
Here we will summarize the key lessons from the first half of the year. A better understanding of what happened in the recent past helps to predict where we are heading from here.

Let’s start by analyzing how the relationship between the aggregate market capitalization of Altcoins and the BTC dominance evolved over the past months. To clarify, when Bitcoin dominance increases, it means that Altcoins are underperforming BTC.

It’s possible to observe three different cycles so far in 2019. Interestingly, each of these periods has a very similar span, and that strengthens the idea that there is a definite pattern here.

1) In the first three months of the year, the broad Altcoin market moved higher, slightly overperforming Bitcoin. It was an early signal that something was brewing and the bear market was shifting. As we can see, BTC dominance was moving lower.

2) In April, the massive 20% price spike of Bitcoin revamped the crypto space. Most of the funds went into BTC, its dominance increased but Altcoins managed to grow in price at least in USD terms.

3) At the end of June, Bitcoin’s price peaked and entered a phase of consolidation (very likely). The uncertainty of the direction of the next big move added significant pressure on the prices of Altcoins. BTC dominance kept trending higher.

It is still early to say that with certainty, but it seems like we have entered a new cycle. BTC dominance touched levels not seen since July 2017, basically the dawn of the Great Bull Market. At the same time, Altcoins retraced to the same price level (in USD terms) they were at back in April. Considering the magnitude of the price moves we witnessed in April, it’s safe to assume those levels should provide strong support in the future.

It’s important to stress that uptrends starting from long periods of consolidations could be particularly powerful. The break out from the range provides confidence and optimism among traders and investors. Those that sold during the consolidation are tempted to buy back at higher prices, and this is a further buying catalyst.

Crypto price analysis methodologies lack a solid track record. In another article, we explain why the price charts are not the only tool traders or investors should look at. Other significant metrics can gauge the state of the crypto industry and can predict where crypto prices are heading to in the future.

On September 19th, Bitcoin’s hash rate hit a new all-time high, passing the 100 exahash milestone. This is a healthy sign that miners are investing more than ever in securing the Bitcoin Blockchain. Pouring new investments into new equipment means that the mining activity still looks profitable and sustainable. In turns, a more secure network makes Bitcoin an ever more tamper-proof asset, increasing its appeal among investors.

From a technical point of view, the network seems healthy. Also, from the usage side, the metrics look encouraging. The transaction count is at a high level, while the number of active wallets seems to be lagging.

The fact that the number of addresses didn’t increase significantly in the past months is an indicator that not many new participants entered the space. The perspective of new people buying cryptocurrencies will reflect with no doubt into prices during the next phase of the Bull Market. Adoption is a slow but powerful process!

Also, the development of the business ecosystem side was quite impressive, and its shaping the industry radically.

No more than two years ago, tech geeks, miners, and fuzzy crypto exchanges were the major players of the crypto space. Today this is different. Here are just some of the most relevant news of the past month for the industry.

Not to mention the impact on mainstream media of the idea of Facebook to launch its Libra association to create a global cryptocurrency backed by a basket of fiat currencies.

The ecosystem is evolving every day, and all the signs seem to point to a new solid Bull run in the coming months and year.

Depending on your investment time frame, trade accordingly and remember that

Please note that none of the above is investment advice. Trading and holding cryptocurrencies remain a high-risk investment that is only advisable to users who are willing to spend time doing their own research.