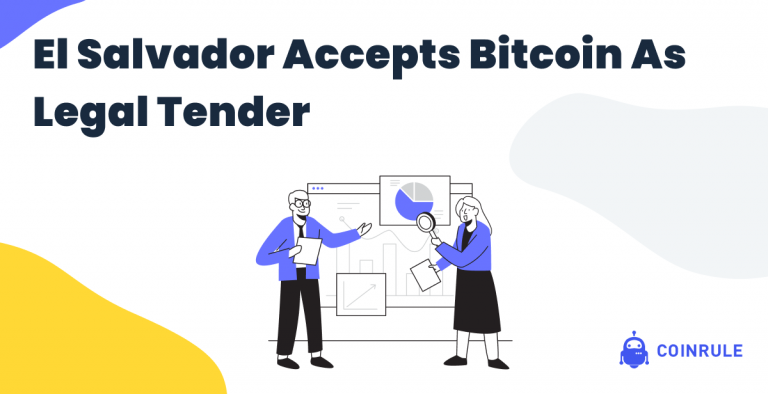 Despite the market volatility, cryptocurrencies seem to be every day more the future of finance. 2020 was the year when corporate institutions started to accumulate Bitcoin. In 2021, it could be time for countries to embrace cryptocurrencies. Now that El Salvador accepts Bitcoin, the question is who is coming next?

After the initial shock caused by the covid-19 outbreak in March 2020, international trade is coming back to its pre-pandemic levels, and countries such as El Salvador benefit from it. Since it decided to adopt the US dollar (USD) as its official currency in 2001, the US fiscal and monetary policies have profoundly influenced the Salvadorian economy. It is clear from the data that the recent depreciation of the USD caused by hefty stimulus checks and expansionary monetary policies has considerably impacted El Salvador’s current account – the sum of all net transactions between a country and the rest of the world.

A cheaper USD implies that goods in El Salvador are more attractive to foreign consumers, while imports become more expensive. This economic phenomenon has led the current account of this small Central American country to reach its all-time high, allowing for an exponential increase in foreign reserves at the national central bank.

But how does all of this relate to the historic announcement that now El Salvador accepts Bitcoin as legal tender?

Well, rising inflation is eroding the USD purchasing power. Hence, converting some of this surplus of foreign currencies into BTC with the prospect of price growth would not only allow them to diversify the composition of their reserves but would also act as a hedge against the depreciation of the USD.

The Salvadorian economy depends heavily on remittances sent home by its nationals abroad. Moreover, around a quarter of the country’s population resides in the US, and just in 2020, they sent home more than $6 billion in transfers – which amounts to more than 20% of its GDP.

Therefore, pointing out that a remarkable amount of these remittances is lost in intermediaries, El Salvador’s President Nayib Bukele said in a tweet that, by using Bitcoin, more than a million low-income households would experience a sizable increase in their wealth.

By its nature, payments in Bitcoin are executed on a peer-to-peer basis, cutting out the middlemen fees. With the news that El Salvador accepts Bitcoin, several other emerging countries around the globe may follow the same path. For the majority of developing countries, remittances make up a significant proportion of their GDP, often considered to be over 10% of total economic output.

The rising cost of debt and capital outflows – will Bitcoin be the salvation?

Escalating price growth in leading economies, specifically the US, is feeding investors’ expectations of increases in interest rates. That would push higher bond yields, causing a surge in debt costs for developing countries as investors demand higher returns.

Looking at the recent exponential growth of external debt in El Salvador, some may consider exploiting a potential rise in Bitcoin to USD price both as a protection against this increase in the cost of USD-denominated debt, as well as a way of making it cheaper to extinguish pre-existing financial obligations.

That could be a feasible option that can apply the same logic to many developing countries, especially those with their currency heavy dependant on the cost of external debt, such as Argentina, Venezuela, Brazil, and Turkey.

In most cases, these national currencies have significantly depreciated since the beginning of the pandemic. Should the US economy recover faster than them, this would cause outflows from their capitals and, eventually, currency weakness. Therefore, adding Bitcoin to their balance sheet may prove to be an effective way to avoid an excessive depreciation of national reserves while mitigating increases in the cost of borrowing and paying back outstanding debts.

El Salvador is a small developing country, and most of its population does not have any financial education. Many citizens do not have traditional bank accounts and do not have access to the most basic financial services, including savings and credit lines.

However, Mr. Bukele stated that El Salvador accepting Bitcoin as a tender would enable people to create online digital wallets with smartphones. Hence, cryptocurrency adoption will offer more financial inclusion throughout the country, allowing people to expand their business activity and economic productivity by including a larger share of the population in the financial sector.

Financial inclusion is a critical issue in all countries and especially in the developing world. Thus, many countries in South American, as well as in Asia, are closely watching El Salvador’s move.

Nevertheless, only time will tell whether this historic moment will turn out as Mr. Bukele has anticipated. In the meantime, El Salvadorians look ready to build the future of their country with cryptocurrencies at its core.