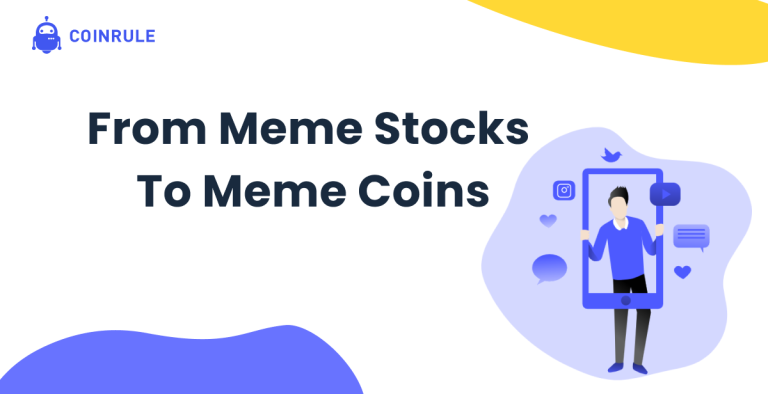 Meme stocks and meme coins have become more popular than ever in the last 2 years. But investing in such stocks and assets can be very risky because of their nature and reliance on human sentiment. They usually don’t have any real-world use cases and they don’t address any existing or future problems either. But, at the same time, simply swearing off the idea of investing in meme stock can also be a mistake.

In this article, we’ll discuss meme stocks and meme coins in detail so that you can understand whether they’re worth buying or not.

What Is a Meme Stock?

A meme stock is a type of stock that has become popular among traders and investors through hype created on social media. The hype can be nefariously created and intentional or entirely accidental. The main driving factor that makes such stocks popular is some internet memes that circulate in the trader/investor communities, such as r/wallstreetbets (a subreddit of Reddit), Facebook, and Instagram. It’s also important to note that most people who invest in meme stocks are inexperienced and young.

As mentioned earlier, Wallstreetbets (usually written r/wallstreetbets) is a subreddit on the Reddit platform. It’s a longstanding community of this social media platform that currently has more than 11 million members. The main purpose of this channel is to discuss and share news about highly speculative and trending stocks, trading strategies, and ideas. Interestingly, this channel has caused huge disruptions in the financial markets many times.

GameStop Was the First Example

GameStop is known as the first example of a meme stock that became popular in late 2020. A Reddit user with the name “Player896” shared a post in r/wallstreetbets with the following title:

The Reddit user explains a strong bullish case in this post for GME (GameStop), a business with physical stores that sells gaming consoles and games. It’s important to note that leading up to this post, the company’s operations and financials were declining because of the COVID-19 pandemic and the rise of digital media.

GameStop was doing everything it could, but investors/traders were dramatically short-selling its stock. Because of the post that Player896 shared, the r/wallstreetbets community saw an opportunity to buy the GameStop shares by going against the financial elite. The goal was to create a significant short squeeze, which might sound a little intimidating but is actually a simple process. Institutional investors borrow shares to short-sell a stock that they don’t currently own, when they believe that it’ll decrease in price. The plan is to buy them back at lower prices later on, so they can make money on stocks they don’t even currently own. If all goes according to plan, they buy back and return the shares they borrowed and end up with the differential between their initial, higher sale price and final, lower buy price as profit.

The r/wallstreetbets community helped cause a short-squeeze by aggressively buying the GME stock. Its price increased by a staggering 1,800% within the span of 9 days. It reached the price of 390 USD from 19.79 USD. Elon Musk, a Business Tycoon and the CEO of Tesla Motors, also played his part by simply tweeting “Gamestonk.” It was misspelled deliberately and became a meme that made GameStop even more popular.

On the crypto side of the market, the rise of meme assets reached a new level with the creation of Dogecoin. In 2013, Jackson Palmer, a software developer, posted a tweet by combining two of the most popular memes of that time. He created an image of the dog Shiba Inu along with the cryptocurrency and shared his ideas about the fictional cryptocurrency. But the response he got on that tweet made him very popular, and he immediately bought the domain “dogecoin.com.”

Later on, another software developer, Billy Markus, contacted him via Twitter and shared his thoughts to make that meme cryptocurrency a reality. Billy also started working on the source code of Bitcoin and made some changes, such as increasing the number of coins and decreasing the block creation time. The two software developers partnered up and launched Dogecoin on 15th December 2013.

Dogecoin, just after being launched, then exploded on Reddit and reached the market capitalization of a staggering 8 million USD. Elon Musk again played his part and posted several tweets regarding the meme cryptocurrency later at the start of 2021. In May 2021, the market capitalization of Dogecoin reached about 88 billion USD. Dogecoin currently flaunts the status of being the 9th biggest cryptocurrency in the world.

Shiba and Other Doge’s “Sons”

In the heat of the market, countless new meme coins started coming out. One of them that has become among the most popular is the Shiba Inu coin. It features the same breed of Dog as does Dogecoin and reached new heights very recently. It reached the value of 0.00008 US dollars per coin from 0.00002 US dollars within 5 days. It wasn’t even the first 50 biggest cryptocurrencies when, and within a matter of a week, it managed to become the 11th most popular coin by market capitalisation in the world.

Other than the Shiba Inu coin, there are also many other Doge “sons” such as Ryoshi Token, Floki Inu, Dogelon Mars, and so on. Most of these meme coins don’t address any real-world problems and are trying to get social media’s attention to become famous like Dogecoin and Shiba Inu.

Cheap meme coins with no real-life use case try to capitalize on the concept of FOMO (Fear of Missing Out). They have the tendency to go up to a certain level, but then they usually break down. However, Dogecoin and Shiba Inu aren’t showing the same trend so far. They seem to have managed to stabilize their values and people are holding onto them. But still, while going from meme stocks to meme coins, the risk factor remains high for such assets, and we recommend you only to invest the amount of money that you can afford to lose if you’re interested in meme assets. The best way to trade these coins is to use small amounts when the coins are small and relatively unknown, and scale out of the positions as the coins become more and more popular.