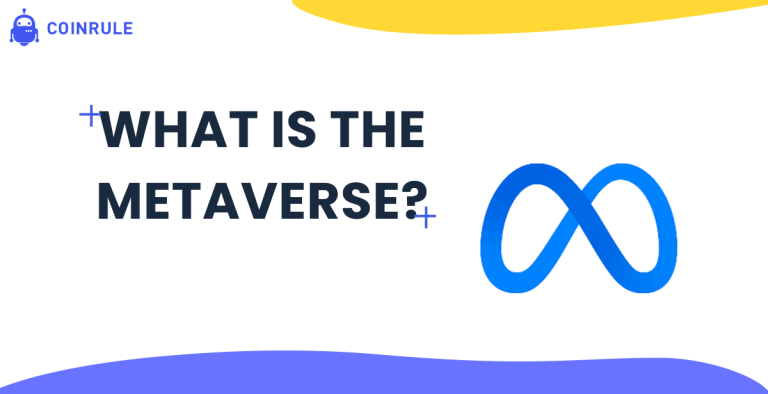 Black Mirror, a British movie series that premiered in 2011, showcased a fictional world where humans closely interacted with technology through virtual and augmented reality. In the movie, humans escaped from the hassles of life as we know it but still had meaningful experiences. In fact, “real life” was virtual, and everyone worked with a point system. Fast forward to today and what was fiction in 2011 is slowly becoming a reality with the potential of this metaverse.

What Is The Metaverse?

On the 28th of October 2021, Facebook CEO Mark Zuckerberg announced that the company was rebranding and changing its name to ‘Meta.’

There have been several questions since this news came out. What is Facebook trying to do? What is the Metaverse? What are the short-term and long-term implications? How would it change the way we live and do things? How would it affect the concept of money? How soon will all these be happening?

At Coinrule, we leave no questions unanswered. So let’s dive deeper into this topic.

Although it seems so, ‘metaverse’ isn’t actually a new word. It has been a buzzword since the 90s when it was popularized by Neal Stephenson in his 1992 fictional novel, Snow Crash.

In the book, Stephenson described the metaverse as a “shared imaginary place for the public available on the internet and projected onto virtual reality goggles.”

Today, experts have described the metaverse as a digital parallel universe. Some also project that it is the future of the internet.

The metaverse is the internet, filled with virtual and augmented reality experiences. Think of it as a world where you can have real-world experiences virtually.

Although some of the technology needed for the universe is currently available, there is a long way to go before the metaverse becomes widely available.

NFTs And The Blockchain In The Metaverse

One of the most common new acronyms in recent times is “NFT” (non-fungible tokens).

Experts have said NFTs and other similar technologies are a crucial part of the metaverse because, with them, the metaverse has a coherent universal currency system.

There are fortunes to be made for those who position themselves and leverage emerging technologies such as game-to-earn and NFTs.

In finance, an asset that is indistinguishable from and interchangeable with other instances of the same asset is said to be a fungible asset. For example, currencies and cryptocurrencies are fungible assets – there is no difference between 2 separate dollar bills or 2 separate bitcoins.

Conversely, a non-fungible token is a unique asset that is interchangeable. It is unique because the value of an NFT is unique to the owner. For instance, digital art that reminds you of your grandmother can be worth $1000 to you. So guess what? That’s what you can set its price at.

NFTs are a secure, decentralised way of identifying and proving ownership of a virtual asset. NFTs are stored on the blockchain. This way, anyone can own these tokens and own digital assets. Anyone that is “selling” a digital product (whether it is art, music, or anything else) is simply selling the proof of ownership of the asset.

NFTs are generated on and protected with blockchain technology. However, the difference between NFTs and, say, bitcoin or ethereum is that there is no general tradable value attached to an NFT in itself.

Over the years, Facebook has evolved from being only a social media platform. With purchases like Instagram and Whatsapp, the company had always shown its ambition. In this light, its name change is not too surprising.

At this point, the company has many subsidiaries and business lines, and it makes sense to change the name from its main app to fit its broader vision.

In his statement, Zuckerberg said:

“I think that there was just a lot of confusion and awkwardness about having the company brand be also the brand of one of the social media apps… I think it’s helpful for people to have a relationship with a company that is different from the relationship with any specific one of the products, that can kind of supersede all of that.”

In March 2014, Mark Zuckerberg bought Oculus, a company that produces VR headsets, for $2.3 billion. That move can be seen as a precursor to this rebrand and the future of the internet.

There is a lot to look forward to in the metaverse, whether you want to invest in it or be an active part of the experience.

Real Opportunities In The Metaverse

Although there is a long way to go, there are early signs that the metaverse is growing, like crypto-powered digital worlds, e.g. Decentraland. This is the first step among many.

In the metaverse, people can pursue all aspects of life. This means that virtually every industry that exists today can exist on the metaverse. The metaverse will also usher in a new reality and gradually provide vast opportunities for digital ownership.

Just like when the internet boom happened, the multiverse will come with several opportunities. Little wonder that Mark Zuckerberg has placed such a big bet on it.

With virtual products, businesses can enter new markets and widen their brand offerings. For instance, buying a limited edition Gucci headband in the metaverse may soon be the new “high fashion” to wear to virtual events.

Similarly, the metaverse will present diverse opportunities for all kinds of brands to sell virtual products.

Ever wondered why the video game industry is more valuable than the sports and film industry combined? The metaverse is projected to be like a realistic and more immersive video game experience.

This will open up doors for businesses to advertise and reach larger audiences. When it eventually happens, the metaverse will change the way advertising is done.

For the metaverse to happen, there will be a massive explosion in and collaboration amongst creators globally. This will mean an increase in core skills such as digital animation, UI/UX design, Visual design, architecture, digital art, Law (IP protection), and more.

Until the metaverse is fully formed, no one can expressly answer the question “What is the metaverse?” However, we can imagine what it would be like to create a more immersive virtual world where people can work, play, shop, and have much more experience with people from around the world.

According to Meta CEO Zuckerberg, “Metaverse is a virtual environment where you can be present with people in digital spaces. You can think of it as an embodied internet that you are inside of rather than just looking at it. We believe it is going to be the successor of the mobile internet”.

Foundational steps are being taken, proving that the dream of a metaverse is gradually manifesting. It’s going to be interesting to watch the events unfold over the coming decades.