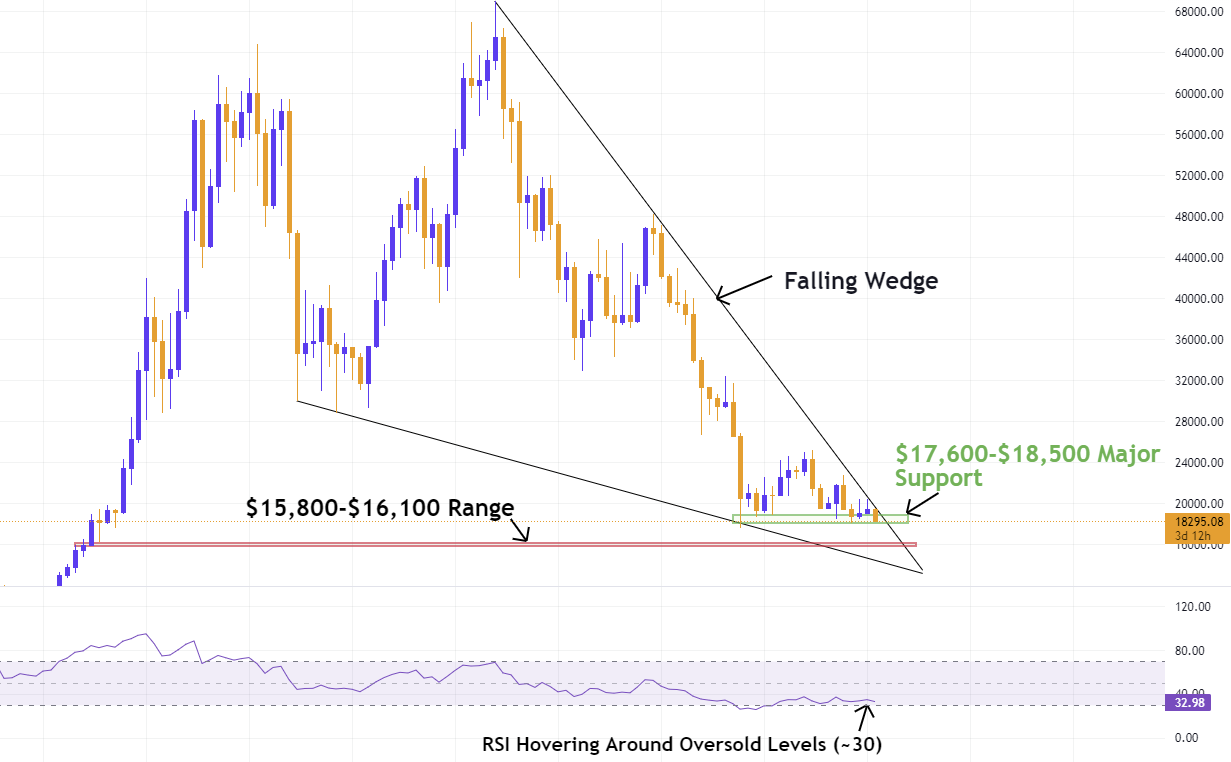 The last two weeks in crypto have been comparatively less volatile than the two weeks prior and it finally looks like we’re getting some reprieve. The market operations that the Bank of England started engaging in appear to have been successful in cooling the pound sell-off as it has gained back some ground against the dollar. This appears to have, at least temporarily, brought some calm to financial markets. Subsequently, Bitcoin has remained stable as it has been trading in the $18,000 to $20,500 range. This comes as a welcome change to the large price swings we’ve been observing in recent weeks.

From a technical perspective, it appears that the price of Bitcoin could be approaching a fulcrum point as it is currency sitting right on the $17,600-$18,500 major support range. Bears will be hoping that we lose this range and see another leg down. Losing this range would bring lows that the market has not seen since 2020, likely around the $15,800-$16,100 range, and would result in a bleak short-term market outlook for crypto.

Despite the price of Bitcoin being relatively stable over the past two weeks, the Bitcoin weekly chart suggests we could be primed for some fireworks. The bulls will find solace in the fact that the weekly chart shows a clear example of a falling wedge. A breakout above this wedge could signal a change in market sentiment and allow Bitcoin to rise towards new range highs, allowing the bulls to reclaim some lost ground against the bears. Another bullish indicator that provides support to this idea is the fact that the Relative Strength Index (RSI) of Bitcoin on the weekly chart has been hovering around oversold levels for some time indicating that we could be primed for a reversal and a change in sentiment.

Another important thing to keep an eye on is inflation figures. U.S. CPI Inflation just came in at 8.2% for the month of September, 0.1% higher than the 8.1% that was expected. Although this is just a slight deviation from the expected value, we have seen in recent months how inflation levels coming in even slightly higher than expected can have stark consequences for financial markets, including crypto. It certainly appears that the Fed’s rate rises have done little to drive down core inflation so far and market expectations towards further rate hikes are strong. Meanwhile and despite a slow-down of the pound’s sell-off, markets keep a close watch on what will happen with the growing UK Pension Funds crisis. On a macro-level, things might just about be starting to get interesting.

Either way, whether it’s pain or a gain, it’s likely we will have a clearer idea of what will happen by the time the weekly close comes in on Sunday.

Check out the chart on TradingView here!