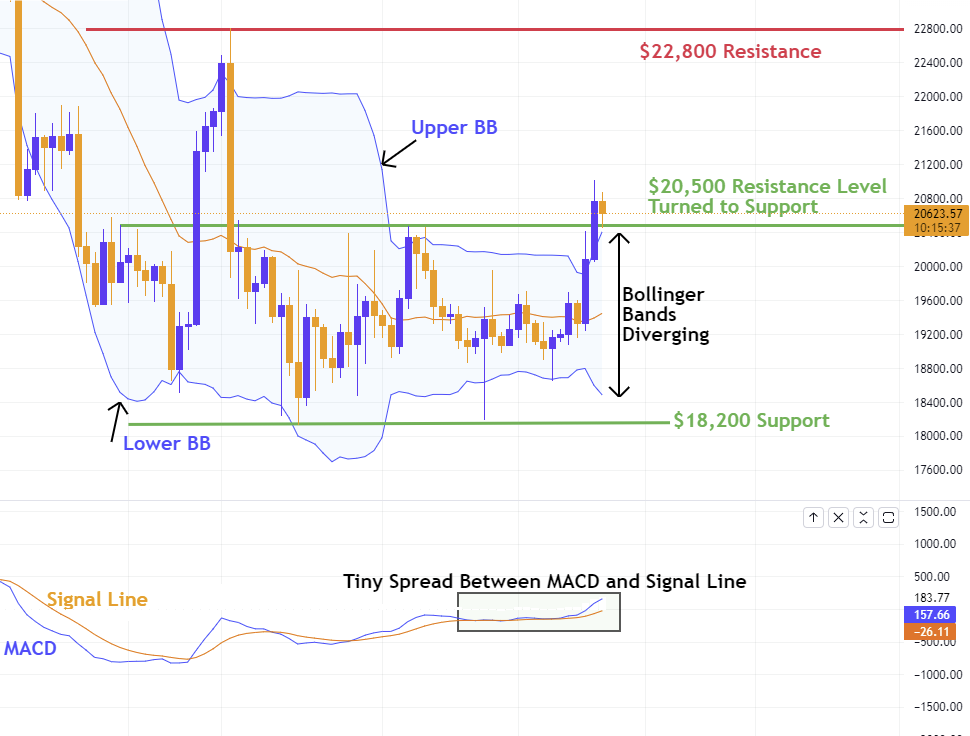 The past two weeks have been another two weeks of low volatility, making October the month with the lowest volatility for some time. However, in the past few days, the upper and lower Bollinger Bands have begun to diverge, implying volatility is starting to pick up. Many active traders will be happy to see a change from the sideways market we have experienced in recent weeks.

From a technical point of view, the bulls will rejoice at the fact that we finally flipped the $20,500 resistance to support and have since retested that level. Bulls will now have their eyes on the $22,800 level which they will be hoping to flip in order to light the way towards $24,000. However, a fall below the $20,500 level would see a return to the range we previously escaped from. The bears will be hoping to see a break below the $18,200 support level which would likely result in new yearly lows. Another important indicator to keep an eye on is the MACD. At present, there is a very small spread between the MACD line and the signal line. If the MACD crosses below the signal line, this would provide support to the idea that we are heading back towards the $18,000-$20,500 range.

In other news, the resignation of UK Prime Minister Liz Truss seems to have restored some confidence in the markets. Consequently, the Pound has gained some serious ground back against the dollar. It now trades at around $1.16, the highest level since the disastrous ‘mini-budget’ was announced. With the newly elected Prime Minister Rishi Sunak having a background in banking and finance, bulls will be hoping he has a firm grasp on the importance of stabilising inflation and the economy. If his government can do this, we could be poised for a more bullish market outlook in the coming months.

Additionally, UK regulators have been urged to ease collateral requirements to avoid a pension-fund blow-up. Market participants will be keeping a close eye on this as the collapse of a large UK pension fund would send shock waves throughout the entire financial system and would signify a bleak short-term outlook for the economy.

Either way, it’s likely that in the coming weeks and months, the outcome of key macro events will dictate the direction of the market. Whether it’s a return to ‘up-only’ or more chaos, things are really starting to heat up.

Check out the chart on TradingView here.