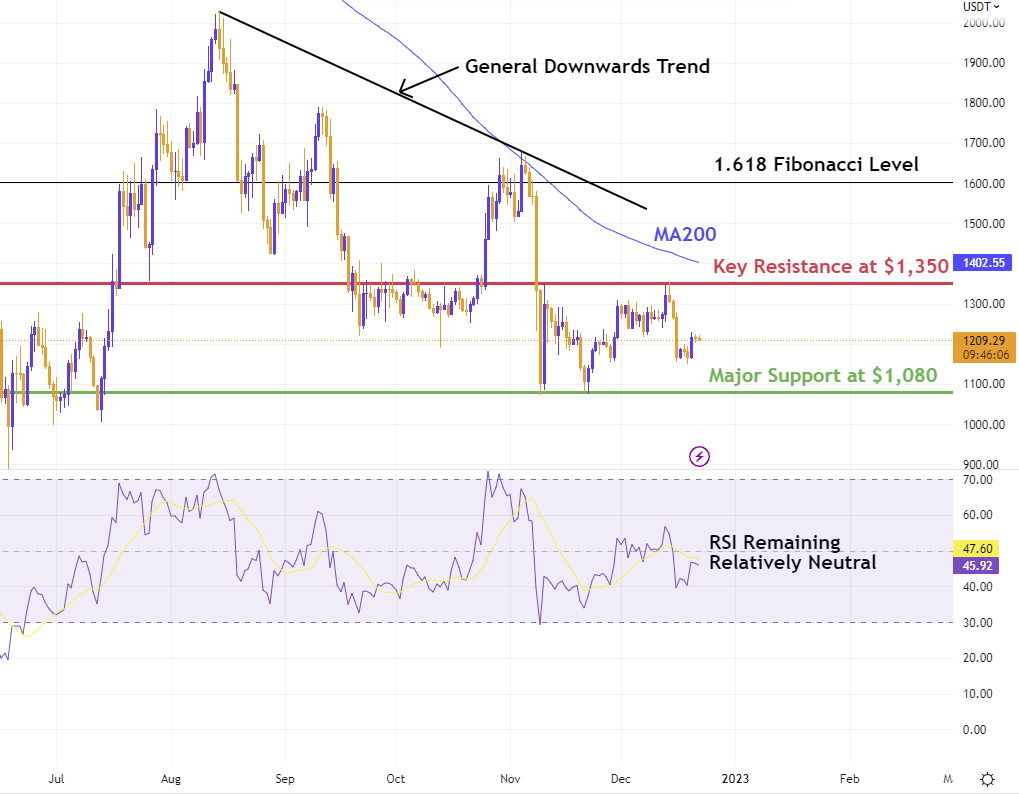 On the 13th and 14th of December respectively, the Bureau of Labor Statistics and the Federal Reserve (FED) published their announcements on inflation figures and interest rates. U.S. CPI inflation came in soft at 7.1%, less than the 7.3% that was expected. As such, the FED stuck to the 50 bps hike that was hinted at previously. Although the market did see a small bounce in relation to these events, it has since corrected back to early December levels after a range of rumours began to spread surrounding Binance.

Some traders feared that Binance’s own stablecoin, BUSD, was having problems as its market capitalization rapidly dropped by $3 billion. A social media frenzy ensued where many questioned Binance’s solvency. In reality, this turned out to be an overreaction as Binance simply bought $3 billion of USDC with BUSD (thereby dropping the market cap) over the counter to honour USDC withdrawals on the exchange. After the rumours of the potential insolvency of FTX began to advance, the exchange reserves were depleted by over 90% in 48 hours. Yet after questions were raised about Binance’s solvency, their reserves only fell by about 6%. Thanks to Binance’s Merkle Tree proof of reserve system, on-chain data shows that this run on their reserves has halted meaning that the largest cryptocurrency exchange is safe, at least for now.

From a technical perspective, the Ethereum daily chart has been bound by weeks of low volatility and has been trading between key support and resistance levels. Traders might look to go long if the market breaks above the $1,350 resistance level as it is clean air up towards the 1.618 Fibonacci level. Conversely, if the price breaks below the $1,080 support level, many traders will look to go short as losing this level will likely bring new lows below $1,000. Meanwhile, Ethereum’s RSI is remaining relatively neutral, not providing any significant support for either scenario.

2022 as a whole has been the year of the “Black Swan” for crypto. From the collapse of LUNA and FTX to the insolvency of Three Arrows Capital and BlockFi, the entire crypto space has had a serious dent put in its credibility. However, under the increasing scrutiny from governments and regulators, if the industry is going to survive long-term its key that any fraudulent and insolvent players are removed and held accountable. With the macro environment still looking challenging, we can still only remain hopeful that 2023 will once again be the year of the bull.

Check out the chart on TradingView here.