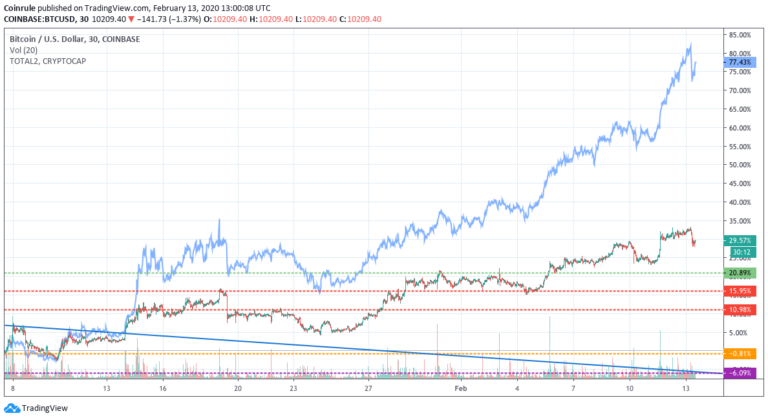 As we wrote before, many signs indicate that we are currently in the early stages of a new Crypto Bull Market.

The initial recovery started in April 2019, but it took over six months for investors and traders to regain the confidence lost during the previous two years of Bear Market. Many Crypto are now starting to look very promising. But which are the most promising crypto in the next bull run?

The chart that synthesises best the current state of the Crypto Market is the one that shows Bitcoin Dominance over the last two years.

In January, after a long period of depression, the broad Altcoin Market started overperforming Bitcoin, and this pushed Bitcoin Dominance below a key trendline. The trendline began precisely from the top of the Crypto bubble when the Altcoin buying-hysteria was at its apex.

This is a clear sign of long-term reversal. It’s quite difficult to estimate the magnitude of the next price move. While it’s challenging to say what to expect from the Crypto Market in the coming months, it’s safe to assume that buying Altcoins in a diversified portfolio could be an attractive option compared to just holding Bitcoin.

Many Altcoins already doubled in price in the past month, but some are lagging, and it could still be a good time for buying. Here are the most promising crypto in the next bull run.

The chart seems to provide evidence for a reversal. The price marked a neat double-bottom, and from there it’s now up around 35%. 0.0077 BTC was a clear resistance, and Monero managed to trade above it for a couple of weeks now. We could see a retest that would provide even better entry prices, but the risk/reward is very appealing.

Strong supports now provide a low downside risk, and the first target is now around an area of 0.012 BTC, which represents a potential upside of over 40% from current prices.

Ravencoin could be one of the most promising Cryptos for the next bull run. The coin is down 80% from the high in March 2019, and that represents a massive upside. Considering that the coin is up only 25% from its low versus Bitcoin, the risk/reward of buying around these levels is very favorable.

The price has been stuck in an accumulating zone since July 2019, so it’s obviously tough to predict when it will move higher. On the other hand, looking at the series of lower highs and at the price compression going on, we can expect some volatility when the verge of the triangle will approach in around one month.

The first significant support area is at 330 satoshis, and the volume increase is a sign of growing interest. Speaking of the volume, the fact that it keeps increasing on up moves and decreasing when the price retraces is a further positive sign to keep an eye on.

The token is up roughly 70% from the lows in September 2019, but the price range between 2.2K and 3K satoshis has historically offered a significant upside of around 90%, making of it clearly one of the promising crypto in the next bull run.

Last week the volume printed the second-highest figure since April 2019, when the price topped at its all-time high. The price is now attempting a new breakout. It will be worth keeping an eye on the next weekly close. If no significant retrenchment occurs in the short-term, that will be the sign that the accumulation phase is over.

Solid fundamentals also back basic Attention Token, and it was included in our watchlist of the coins with the highest long-term potentials.

The so-called Chinese Ethereum has been heavily hammered hard during the Bear Market and the price traded for long in a steep downtrend. The coin is currently up 60% from the bottom but still has an upside of about 800% to reach the top again.

At the end of October, the price broke above a major trendline with a remarkable volume, and since then ranged between 0.00144 and 0.1160 BTC. The volume decreased on the pullback and started to pick up again when the price approached the upper bound of the range. That’s a very positive sign.

It’s also interesting to notice that the price is forming a cup-and-handle pattern around the bottom. That is a generally bullish structure that could provide further evidence of a reversal.

The token has a structure that resembles NEO closely. The price currently doubled since the lows but has an upside potential of about 700% to the all-time highs reached in May 2018. It’s worth noticing that the price topped while the market was struggling with a severe Bear Market. Traders should take this into account as that is an index of potential decorrelation with Bitcoin and the rest of the market.

The price double-bottomed at 1400 satoshis and the rebound lead to a breakout from the long-term downtrend. Also in this case, the move was coupled with a significant volume increase that validates its importance.

From the fundamental point of view, the token trades on all major exchanges and the team has a solid connection into the Crypto community. On top of that, 2019 saw a parabolic growth of the DeFi environment and the token could play a prominent role among the most promising cryptos in the next bull run.

How To Take Advantage Of These Setups?

Depending on the strategy that you prefer to pursue, different approaches could prove profitable in the current market conditions.

Choose the strategy that fits your need and expectations of the market best and never forget to apply the basic rules of Risk Management.

I am not an analyst or investment advisor. Everything that I provide here site is purely for guidance, informational and educational purposes. You should independently verify all information in my post. I can’t be found accountable for any loss or damage whatsoever caused in reliance upon such information. Please be aware that trading cryptocurrencies involve a significant degree of risk.